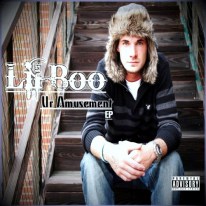 Ur Amusement is the first of many projects to come from the artist who goes by the name of Lil’ Boo. This Bossier City native has seen his share of hard times and takes a shot at sharing his experiences with the release of Ur Amusement. This 5 track EP starts out on a mellow tone, taking you on a bit of a roller coaster ride, with it’s high and low points.

“Still Standing”, the EP’s first single and stand out track, has a slow rock type feel with a splash of hip hop. This track also displays Lil’ Boo’s vocal potential, as does the EP’s second single and album title “Ur Amusement”. When listening to Ur Amusement, you get the sense of an artist passionately trying to share his struggle to become noticed in the rap game, despite of his skin tone.

“Luiziana Thug”, “I Slang”, and “G Shit” all fall into the realm of gang related suggestions and a sense of establishing street cred, though the production helps give them a likable fit. In some cases, the streets isn’t always the best way to market for hip-hop/rap album, but can still prove to be an asset to help establish a fan base at home.

Overall, Ur Amusement is a decent starter album for Lil’ Boo, but there’s still lots of room for development and improvement.