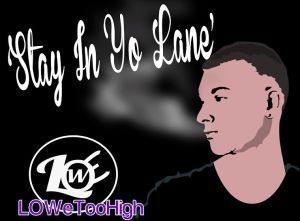 LANCASTER, PA – Out of Lancaster, Pennsylvania comes the biggest surprise that rap has ever seen. Twenty year old, Lowe has turned the game upside down with his new single, “Stay In Yo Lane”. The single is his latest creation since the release of his hit EP, “Wyld”. In the EP, Lowe focused on quality not quantity with his eight track project. Listeners have been pleasantly surprised with Lowe’s sick beats, original flow, and his gritty lyrics. The project has received so much success that is has been listed as a premium mixtape on Coast 2 Coast since its release.

Underground rap fans are not the only ones that have taken notice of Lowe’s talent, the EP is filled with shout outs from the biggest names in hip hop including A$AP Rocky, Big Sean, 2 Chainz. and Wiz Khalifa!

This project was released after several months of anticipation from fans and a big buzz in the media. When asked for his thoughts on the excitement from “Stay In Yo Lane”, Lowe had this to say, “There is nothing greater than hearing fans that relate to my music. Hip hop has got me through tough times in life and I try to leave everything I have in the studio. Thank you to all who made this project possible.”

Lowe has just finished his Wyld Tour where he opened up for artists like Lil Reese, Chris Webby Kid Ink and Tech N9ne. To learn more about Lowe visit www.LoweTooHigh.com