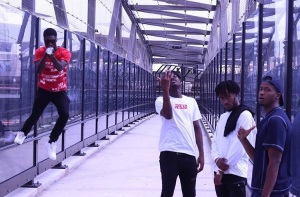 The Bluntedboyz are a collective group of highly energetic rap artists from Maryland. With that positive and unique energy, it quickly led the group to create songs such as “Trojan” and the newly released single, “Break It Down”.

“Break It Down” was released on October 12, 2018 under their own Bluntedboyz Entertainment brand.

The song was inspired by PB’s little brother, who can actually be seen in the beginning of the video. “I was hyping up my lil brother because he was dancing and all I kept sayin’ was, break down break it down “, said PB. And that’s when fellow group member King Lee wanted to make it a real song.

The group also released visuals to their new single and can be viewed on Youtube and is now available on iTunes, as well as other digital and streaming platforms.