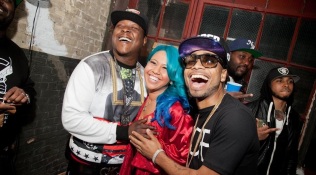 POUGHKEEPSIE, NY – The anticipation is almost over. New York’s rap scene has been buzzing for months, since rumors began to circulate about Young Dougie releasing a new single with fellow rap star, Jadakiss. The momentum really started to increase on May 6th Dougie mentioned the release of the behind the scenes video on his instagram.

Like every great song the magic began in the studio. The beat was discovered and chosen by Dougie’s manager Don Q. After Dougie laid down the first verse and wrote the hook, Don Q instantly foresaw a smash hit so he made moves to get Jadakiss on the track. Dougie and Don went to D Block Studios in Yonkers, NY and, after hearing Young Dougie’s crafty delivery, Jadakiss was excited to contribute the icing on the record. When the track was complete, Dougie and Kiss knew that the fans would soon demand a video and decided to shoot it before the audio track was even released.

The video was shot at the legendary Art Factory in Paterson, NJ and it has everything that a video needs, a hit song, a great director, and as Jadakiss says in the behind the scenes video “beautiful ladies on the set.”

Although Young Dougie is currently being praised what he can do in the studio, his real claim to fame is the talent and ability that he delivers as a live performer. Dougie has spent the last several years touring, headlining concerts, and even sharing the stage with other hip hop greats such as; Meek Mill, French Montana, 2 Chainz, and Miguel.

Although his music is a huge success, things have not always been easy for Young Dougie. Being raised in New York’s inner city by a single mother of six children was hard for the young rapper. The hardest of his struggles came in his early youth when he lost contact with his role model and oldest brother due to a ten year prison sentence. Despite life’s obstacles, Young Dougie has chosen to rise above his circumstances and make music his outlet for all of his emotions. It is this transparency that his fans have grown to appreciate. Young Dougie’s plans on releasing the single and video on June 2, 2014 through his exclusive music label Komrad Entertainment.