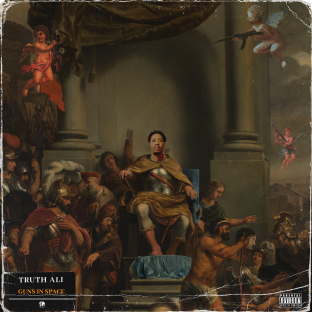 No stranger to the grind, Westcoast hip-hop artist Truth Ali has been consistently making his presence known in the music industry. Having worked with notable artists such as Royce da 5’9″, Cyhi the Prince and Kxng Crooked, just to name a few.

His newest single ‘Guns In Space‘ was released on December 20, 2019, via the School of Genius brand and is now available on Spotify and other available streaming platforms.

In an interview with Rollingout.com, Ali was asked about the idea behind the cover artwork, he stated –

“I’m big on art with layers. The song concept is basically just [an] emcee gun busting on the surface. Under the surface, it’s about the mind being a universe. The universe is always expanding, so if you shoot a gun in space, it’ll go forever, kinda like my flows.”